How To Remove Spider Eggs

How To Remove Spider Eggs

Spiders scare many people with their creepy appearance and speed, but they pose more serious threats than simply startling humans. Some spiders such as black widows and brown recluses have toxic venom that can cause serious illnesses. In addition to this, spiders in the recluse family have necrotic bites, which means they destroy flesh when left untreated. There are also other spiders that can leave itchy bites or cause illnesses. 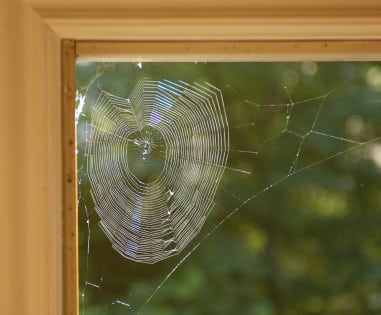 One common sign of a spider infestation is finding egg sacs inside a house. Most people simply sweep them away when they find these sacs, but there are usually more hiding somewhere. People commonly throw them in the trash, and the eggs hatch anyway. With so many spiders coming from just one egg sac, it is important to avoid letting them hatch in the home. Infestations can spread quickly to grow out of control.

Egg sacs are commonly found under or on the back of furniture. They are also found in corners or places that remain undisturbed and dusty. Cleaning frequently is a good way to prevent spiders from building their egg sacs. However, when finding egg sacs indoors or outdoors, it is important to call a pest control professional immediately. While there are DIY removal and prevention tips for spiders, it is important to remember they usually survive most of these treatments. Spiders are tricky pests to eliminate because of their ability to hide and keep their bodies from dragging in chemicals. Also, DIY removal methods can be dangerous to pets and children. People using sprays can burn their eyes, and over-the-counter chemicals leave harmful residue behind. A professional uses effective removal and prevention treatments that are less harmful.